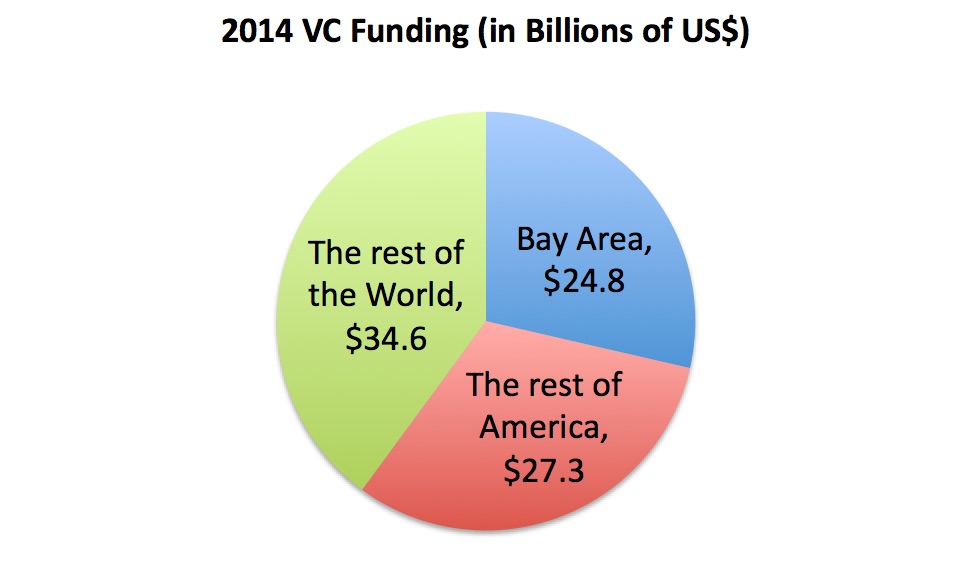 Many different countries have attempted to copy Silicon Valley. Every single one has failed. While the economic significance of high-tech entrepreneurship is known throughout the world, America still rakes in 60% of worldwide VC (venture capital) funding – half of which goes to just the Bay Area. To put that in perspective, the world of VC funding can be broken into three similarly sized parts: Silicon Valley, the rest of America, and the rest of the world.

In understanding Silicon Valley’s dominance of high-tech entrepreneurship, it is vital to understand the history of Silicon Valley. Before WWII, Stanford engineering Professor Frederick Terman facilitated collaboration between his students and local technology companies. During WWII, the demand for electronics grew, and so did these companies. The Cold War further increased the demand for military technologies, and many of these Bay Area technology companies received large government contracts. The growing Bay Area technology sector prompted established East Coast industrial giants like Lockheed Corporation and GE to expand to the region. As the Cold War wound down, government contracts with Bay Area technology companies dwindled, forcing financial cuts. Layoffs resulted in a situation of many smart, educated engineers with good social connections, yet unable to find work at the industries they knew. A portion of these engineers become entrepreneurs, and others joined newly formed startups. Thus Silicon Valley as we know it today was formed.

Silicon Valley attracts aspiring entrepreneurs from all over the world – Elon Musk and Sergey Brin hail from South Africa and Russia, respectively – and the Bay Area’s two elite universities cater to entrepreneurially and technically minded students. In order for another area to compete with Silicon Valley, it would need to establish itself enough that aspiring Elons and Sergeys would move there instead.

Establishing an area as a high-tech startup ecosystem on the level of Silicon Valley is much harder than it appears. Most efforts to copy Silicon Valley focus on providing incentives for VC funding, or incubators for startups. These efforts, however, are not sufficient. To get enough high-quality technical people in the same location and with enough connections to form many high-tech startups, it likely would take more than incubators. Billions of dollars invested over decades might be necessary. And to motivate enough of these people to take the risk of entrepreneurship despite having skills that generally give good career prospects, venture capital might not be enough. A motivator of joblessness might be necessary. In theory a country could copy the specific process that produced Silicon Valley by first spending decades investing billions of dollars in technology in one location (thus attracting the talent) and subsequently cutting the funding quickly (thereby motivating many of these talented people to found and join startups). While such policies may lead to another Silicon Valley, no country is silly enough to implement these policies. And that is why [insert country name]’s attempt to copy Silicon Valley will fail.