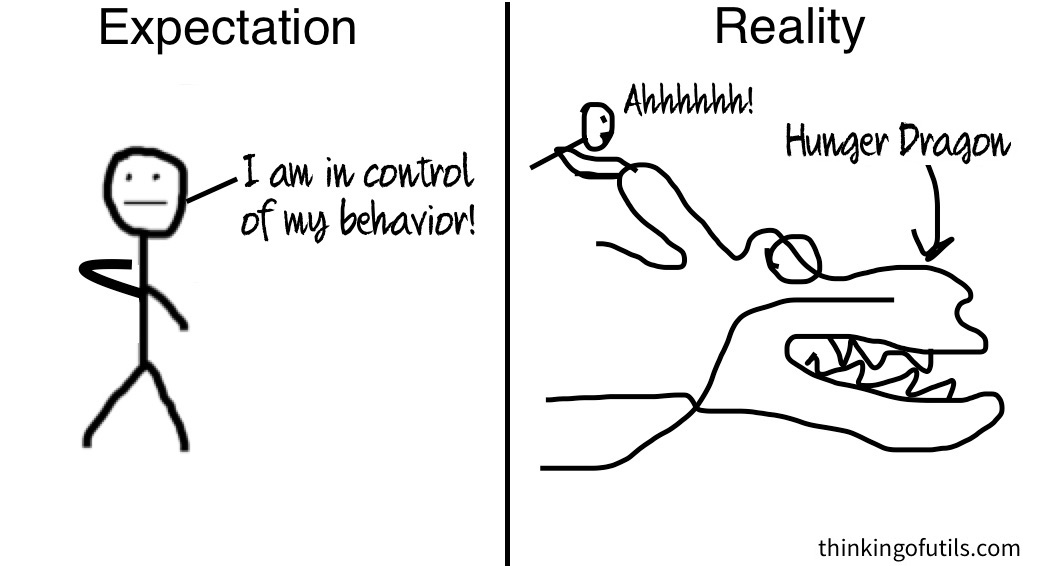 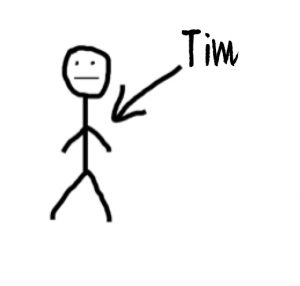 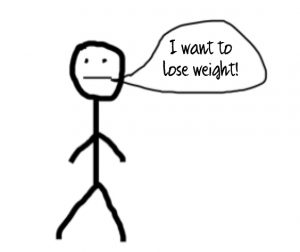 Tim also wants to live a long time, to feel energetic, and to be more attractive to women.

Tim doesn’t know much about nutrition, but he does know that if he eats fewer calories than he burns, he will lose weight.

He thinks of himself as a rational human being, in control of his actions. What he doesn’t realize is that he’s totally at the whims of Stronger Forces.

Tim’s Hunger Dragon starts acting up whenever Tim goes more than a few hours without eating. This Hunger Dragon decreases his energy and focus while gnawing at him, and is only satiated once Tim has a large meal.

And while the Hunger Dragon is usually quite powerful, nothing lights a fire under it like when Tim loses weight.

Tim additionally has a Sweet Tooth. While Tim’s desires are constantly pulled in different directions – from health to work to women – Sweet Tooth has a one-track mind, and it’s persistent. 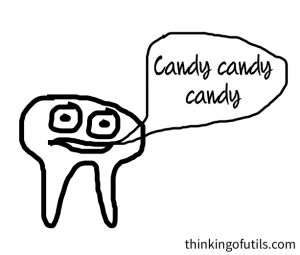 And Sweet Tooth has no problem striking when Tim is feeling weakest, loneliest, or just bored.

Once Sweet Tooth is empowered enough, Tim reaches for junk food and doesn’t even wait. But why Sweet Tooth and the Hunger Dragon are so powerful has to do with evolution.

How The Hunger Dragon And Sweet Tooth Evolved 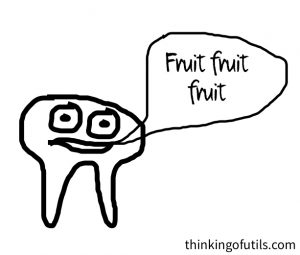 But there are several important differences between the lives of Taa and Tim. While Taa’s day was insanely active, Tim spends much of his time at a desk. Taa could only eat what he could get his hands on, while Tim has a cabinet full of food in his house. Making matters worse, the Hunger Dragon and Sweet Tooth feel invigorated knowing how accessible food is and kick into overdrive.

Tim additionally has access to junk food that Taa did not. This junk food is specifically designed to be irresistible to the Hunger Dragon and Sweet Tooth, despite side effects of major health problems.

The Problem With Fad Diets

If Tim wanted to learn how to make his car go faster, he’d learn how all the parts worked and how they depended on each other. Then, he’d use this knowledge to replace parts in a manner that made sense.

Yet when Tim wants to learn how to improve his own health, he doesn’t bother learning how his own body works as a system, and instead jumps from fad diet to fad diet. He hopes for a silver bullet.

Let’s dig a bit deeper into Tim’s physiology. The first place to start is with the friendship of Sweet Tooth and Insulin. 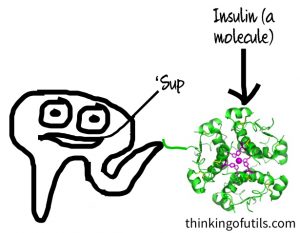 Sweet Tooth is really good at finding yummy food. He then gives this food to the digestive system, where it is broken down into its basic building blocks.

Carbohydrate chains (long chains of a bunch of sugar molecules) are broken down into sugar. This sugar is released into the bloodstream. Insulin, a molecule, then chases after this sugar by entering the bloodstream. This insulin helps sugar enter cells, where it can be used as fuel all throughout Tim’s body.

The amount of sugar in Tim’s blood (his blood sugar) rises after he eats carbohydrate chains and these chains are broken down. His blood sugar level gradually falls as insulin helps more and more sugar enter his cells.

We’ve already covered what will happen if Tim goes too long without eating and his blood sugar gets too low – while his body will start to burn fat (and muscle) to make more energy for his cells, the Hunger Dragon will kick into overdrive, and the Metabolism Dragon will sap him of his energy and focus.

But what happens if his blood sugar gets too high?

In this case, extra insulin enters the bloodstream. And since the cells don’t need that much fuel, most of this extra sugar is stored in fat cells. In ancient times, insulin helped Taa prepare for catastrophe – the extra fat allowed him to survive in case of a famine or a poor hunting season.

Unfortunately for Tim, this extra fat is largely organ fat (also known as visceral fat) – fat wrapped around his organs. This organ fat is particularly dangerous as it is associated with poor organ function, inflammation, and increased chance of a heart attack.

When Tim spikes his blood sugar, blood sugar rises so quickly that a flood of insulin is released in response. But after the blood sugar is brought back down to normal levels, there is still a lot of insulin in the blood stream, and since insulin likes storing excess sugar as fat, it just keeps doing that. Blood sugar is brought down below normal levels. Muscle and fat are then burned for energy, and the two Dragons snap on – possibly causing Tim to eat more after the meal.

The whole process makes Tim groggy and can even leave Tim feeling lower energy or hungrier than before the meal. 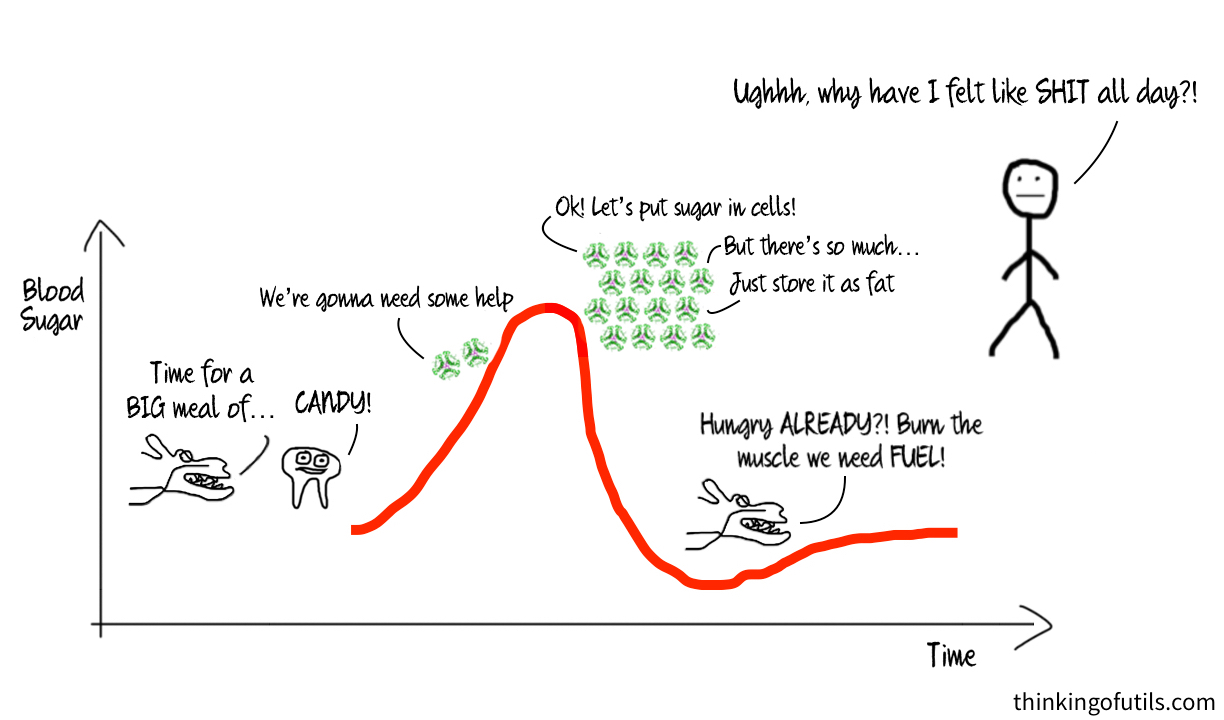 But it gets even worse. If Tim develops a habit of routinely spiking his blood sugar, large amounts of insulin will get released into his bloodstream ALL THE TIME.

His body thinks “Hey, why is all this insulin taking the sugar for muscle and fat cells? Doesn’t the insulin know we need a lot of that sugar to fuel the brain!” Cells stop listening to the insulin, making the insulin less effective.

This process is known as insulin resistance.

But the insulin loves doing it’s job so much, so then it responds, “Hell no! You can’t keep me from doing what I love!” and more insulin enters the bloodstream in a quest to do its job. This can create a vicious cycle, and additionally leads to other negative effects like decreasing Tim’s focus, causing psychological problems, and making Tim tired and hungry.

If insulin resistance becomes bad enough, it can become permanent in what’s known as type II diabetes. At that point, whenever Tim eats carbohydrates, so much insulin floods the bloodstream that much of the blood sugar is quickly turned into dangerous organ fat.

How To Not Spike Your Blood Sugar

If Tim wants to avoid spiking his blood sugar, the first thing he should avoid is simply eating too many carbohydrates at any one time.

The carbohydrate portion of meals should typically be limited to around as much as he’d find in a couple slices of bread or in a small bowl of grains. A giant bowl of pasta or a large pizza might be satiating, but that’s too many carbs all at once.

The key for carbs is moderation. They’re good for you in moderate amounts, but bad in large amounts. And that’s true for each meal. So don’t have one meal with no carbs and then another with a lot – have a moderate amount at each.

In addition to avoiding large heapings of carbs, Tim should also limit carbs that get broken into sugars right away. A relatively small amount of carbs can still spike blood sugar if it’s turned into sugar right away.

The obvious culprits here are candy and dessert, which contain already broken down sugar. But fruit also has a lot of sugar in it. Tim shouldn’t avoid fruit entirely. Eating large amounts of fruit in any one sitting, however, has many of the same negative effects as eating a large dessert.

And Tim should avoid liquid carbohydrates. Food in liquid form is already broken down quite far, and can therefore be absorbed much quicker.

One soda has about as much sugar as a piece of cake. Juice has similar amounts of sugar to soda, and while juice has a reputation for being healthy, the nutrients in it tend to be weakened from having been oxidized (more on that later). 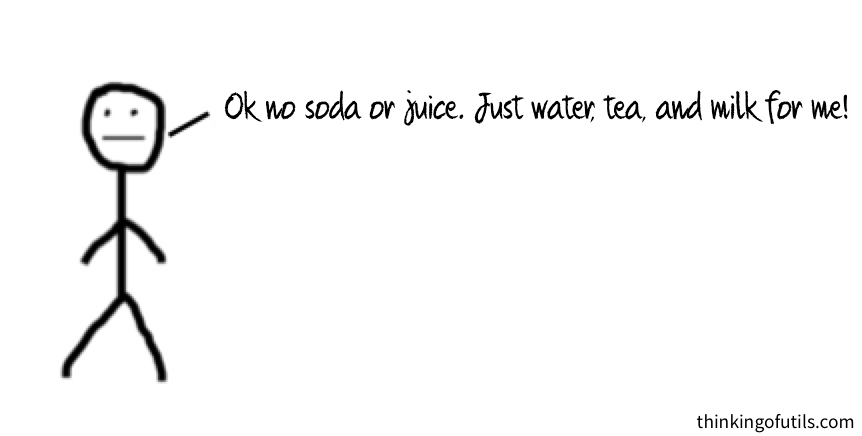 No, no milk. You think milk is good for you because the milk industry spends tons of money advertising it as such. It’s not. You can get just as much calcium from vegetables.

In addition to water and tea, feel free to drink coffee (which actually is quite good for you), alcohol (in moderation), and diet soda (which is much less harmful than regular soda, though don’t go overboard). Just make sure your coffee or tea doesn’t contain lots of added sugar.

Why Veggies Are So Important

So we’ve covered sugar. Other carbohydrates include bread, cereal, rice, tortillas, chips, pasta, beans, legumes, and starchy vegetables such as potatoes, corn, peas, and squash. For these foods, the sugar molecules grab onto each other and form chains. During digestion, these chains have to be broken.

For all of these carbohydrates chains, we can slow down the release of sugar into the bloodstream by slowing down how quickly the chains are broken down.

This can be done by eating non-starchy vegetables (broccoli, spinach, carrots, lettuce, kale, cauliflower, etcetera) or healthy fats (avocado, olive oil, nuts) before eating the carbohydrate chains. The way this works is that the digestive system contains molecules that are responsible for breaking up the food you eat. These molecules are generally pretty quick at breaking down the carbohydrate chains (though legumes and beans do take a bit longer). 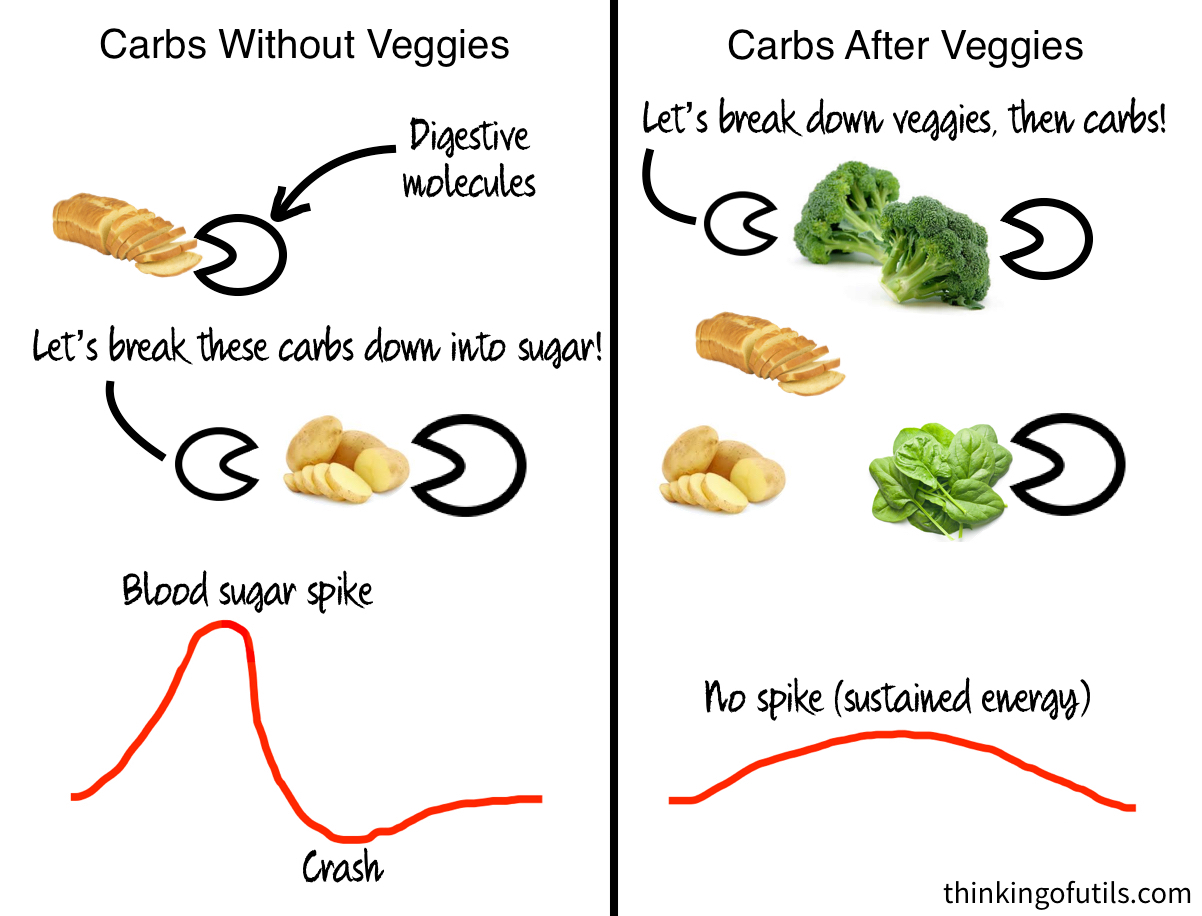 And while these veggies are technically carbohydrates, they have so few calories that their effect on blood sugar can typically be ignored. If you eat two whole handfuls of vegetables before eating your carbohydrate chains, the carbs will be digested much slower. 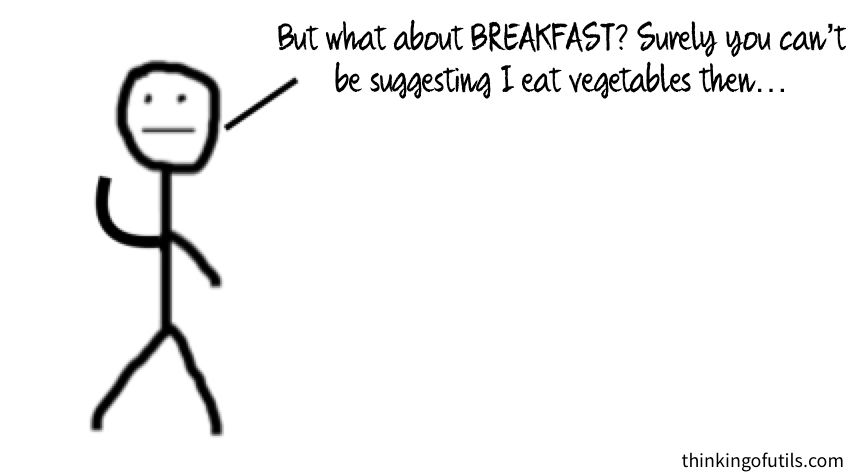 Why not? If you like how they taste then it shouldn’t be a problem, and if you don’t then find other vegetables or recipes that you do. One easy way to do this is to make too many veggies with dinner and then eat the leftovers with breakfast the next day.

If you want a diet that works in the real world instead of just in theory, you need to work alongside the Stronger Forces instead of against them. You can’t beat the Hunger Dragon – he’s just too powerful. You might be able to beat your Sweet Tooth, but you’re probably better off compromising a bit.

That’s where you try to eat no dessert despite craving some, give in a little, start to feel ashamed, think “fuck it,” and the next thing you know you’ve eaten two tubs of ice cream. Due to the nature of insulin and blood sugar, a small serving of junk food is much less harmful than a large serving.

Also recognize that ultimately, Sweet Tooth just wants yummy food. Both you and Sweet Tooth can be happy if you find recipes for vegetables that you enjoy.

And eating lots of veggies will have further benefits of increased energy, improved cognition, and decreasing your chances of getting cancer.

How To Decrease The Risk Of Cancer

The same thing happens in dried fruit and vegetable “chips.” You may think these foods have nutrients in them, but those nutrients are weak and ineffective.

Speaking of cancer, make sure to avoid burnt, processed, and fried meats (and poultry skin). Like tobacco smoke, those also attack your DNA.

Putting It All Together

1) moderate amounts of carbohydrate chains at every meal

Further reading: much of the content here was learned from Stanford’s nutrition class, taught by Dr. Clyde Wilson